The most interesting part of most long distance love stories is how people from two completely different states, continents, seemingly different worlds can meet one another and end up falling in love. What astonishes people more is that this love lasts, and these people end up staying together, for years, forever.

So to help people understand, and maybe give inspiration to those currently debating on whether or not to embark on the journey that is a long distance relationship; as well as those who are in them and currently planning on spending holidays together, or facing the holidays apart I am going to share my own.

Our story began in November of 2011, during this time I was a roleplayer, meaning I used to join forums and would roleplay out scenarios through writing; my big thing was Harry Potter roleplays. (This is geeky as hell I am aware, but I loved Harry Potter for ages!) I had recently re-joined one a little over a year earlier that I had been a member on years ago this one was Hogwarts Online. At the time I joined the forum was on a forum that was hosted on Jcink Forum Hosting, this all may seem like weird information and nothing that could ever possibly have to do with a love story or how two people met; but bear with me here, because it does have relevance. After a while on this forum I became a sub-administrator and began helping with a lot of back end things as well as running a section of the forum on my own, well while trying to re-order forums one day in late January 2012, I encountered an annoying problem. I was ordering the forums in the Administrators Control Panel (AdminCP) and every time I went to save them, they were all setting back to 0 and not going into the order I was placing them in. I was baffled and just going, “What the hell!” Well I had an account on the Jcink Support Forum, had never used it mainly just for lurking purposes, reading different things, finding small issues and how to avoid them, so on and so forth. Since I was now encountering a larger issue, and coincidentally so was another sub-administrator I decided to post on the support forum. The fastest way to get help is to go to the forum staff isn’t it? Well of course it is!

So that is what I did, I went to the support forum and I posted a new topic explaining what was going on with my forum and the issue I was encountering, and to my surprise Jcink himself answered me! At this time I figured Jcink was an account used by all of the staff of the forum service to answer questions and things, because I honestly did not know much about the owner of the service or anything else really, but I’m getting ahead of myself. Anyway I posted my issue and this is the thread of replies that occurred:

Myself: Sometime this morning on a very large board I am on, our forums in several categories just decided to reset themselves all to one (1). Now no matter how many times I go in and re-order my section of forums, they still say set to one (1) all forums and sub-forums. This is making me want to rip my hair out in annoyance…O.o…for reals.

Jcink: I probably will need a board URL and access to the Admin CP to solve this one if you’ve exhausted every other method of trying to order them. There’s no reason for this to happen and it has never been reported as an issue before either, so it looks like something isolated went wrong with your board.Post the board link here and I’ll have a look.

Myself: **Posted Board Link**

Jcink: This board has almost 3500 forums. Wow.Looking at the database directly for this board it shows that position data is being saved. I see the forum “Professor Announcements” has a position # of 2. Announcements Archive has a position number of 5.This isn’t reflected at all in the Admin CP? I honestly don’t think this stuff reset itself, somebody probably did something here…

You see this here is lovely this is where he subtly tries to imply I am somehow screwing it up, he is very crafty with this implication, however I picked up on it then and even told him so afterwards.

Myself: Well those forums are not something I touch they lie under the Hogwarts Governors, but the Category of Norway and all forums within are mine and I finalized their positions just three days ago, thus far the other Admins have told me they did not touch them and I had not logged into Admin CP until just recently when suddenly everything went to the wrong spots. So in all honesty I have no f—ing clue what is causing it but it seems to be only affecting the two newest categories and our forums within.

Jcink: Perhaps the issue is that they were never actually ordered to begin with. When new forums are created they get created with a default position of “1.” In this way, when all forums are set to 1 they’re basically ordered by creation date / forum identification number. If a new forum is thrown into a category full of unordered forums, but it has an order of say, 5, 2, etc, set for it, then all of the others need to then be set as well to get the desired order.At least, this sounds like what’s going on.

More subtle hinting that I the user am the problem not the actual forum service, lol.

Myself: That would make sense if I didn’t create and order my forums myself, when created I order them with the others then assign their skin set. Also the Admin of the other section that is messing up is having the same issue when she tries to reorder them in the ACP.This is the convo we just had when I asked her about it:

So it is affecting more than just me and not letting them change it either.

Jcink: In the database for the category “Norway” it looks like all of the forums have a position of “0.” I just reset them all to have a position of “1.” Try moving them around now and see if it works? If not there’s no choice but for me to personally come on and have look at this point.

Myself: I just attempted to reposition the main forums and the sub-forums for the Village of Gragheim forum to test this and it still set them all to a position of one (1). -headfrickingdesk-

Jcink: Wow, okay.After 2 hours of picking at this, I finally figured out what the problem was. In the simplest way that I can explain this, the default configuration for our server was set to only allow 1000 inputs.Each of those order boxes counted as inputs. Since you guys have well OVER 1000 forums that means the majority of the time when you tried to order them, only 1000 actually got through. The rest would just get reset.I had no idea about this default setting, sorry. I changed the limit to 4000, this should more than cover the amount of forums there with a lot extra for the future.I’m not really sure what may happen now that all of your forums can actually be ordered correctly – other things may slide out of place since they’ll be picking up a legitimate order, so if you see that happening you’ll have to reorder it. Sorry.I tested ordering a few forums under the norway category and it seems to have worked now. Let me know if you can order the original forums you attempted to.Thanks for letting us know about this issue. There’s probably no way I would have ever figured this out without it being reported because most of our users would not have pressed this limit.

Oh, look what a coincidence after all of that, the user was not wrong, the user did not break it, go the user!

Myself: No problem and a HUGE THANKS from all of us on the board for fixing it in a timely manner. It was driving a few of us absolutely insane trying to figure out the issue and getting nothing but reset over and over again.

I graciously thanked him, and moved on back to my forum. Now you may be wondering why any of this little exchange between us matters at all, the funny thing is my boyfriend is Jcink. It turns out one person owned and runs the entire service. After this little exchange I later encountered another issue and ended up joining a chatroom for his service to try and get assistance with the issue faster, it worked I got help right away! Actually I originally had found it to call him an asshole for being a jerk to me in the support thread, but then couldn’t do it becaue he turned out to be nice.

After all the forum issues were aside, we started talking through private messages, and at one point a few of the other chatroom people had creeped enough to steal pictures from my Facebook and post them into the chat. I had shared only one before then, well the private talking continued then and there was more of it. We then progressed to exchanging Skype ID’s and adding each other and chatting even more. And from then we became a couple on April 2, 2012. We were both very shy at first and neither of us really asked the other out we had a conversation one night about liking each other and how guys were very dense because it seemed like he did not even know I was trying to hint I liked him; and we became a couple.

So in the end we kind of met and fell in love, when he implied I was a complete idiot about some things, and it turned out I really was not, love ensued. We met for the first time in person on November 5, 2012 and since then have visited each other as much as possible. He will be here in 31 days to spend the last half of the holiday break with me, and we are so excited and happy for it. It has been almost three (3) years and we don’t go a day without speaking, we have had ups and down and terrible times, and we hate being apart, but I wouldn’t trade it for anything else. So that’s our “How We Met” and how I fell in love with the most amazing man in the world who even from 1,085 miles away can take care of me and make my day better than anyone else ever has. 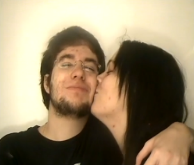